My trip to Las Vegas was so fun and cray, in my own way.

On Friday we arrived to Las Vegas at around 3PM. It was such a long ride to Las vegas. The whole time i was just listening to Cher Lloyd and Lana del rey. And once i arrive to the strip i see a huge fucking bus with Lana Del Rey all over it. 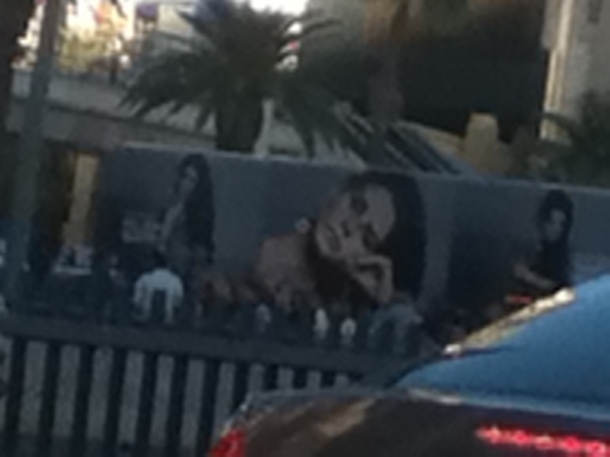 I was like flipping out. The first thing i do is pull out my ipod and take a picture. “OMG MOM LOOK! AH! ITS LANA DEL REY! THAT BUS IS SO AMAZING. AH!” HOW AWESOME IS THAT!? THAT YOU SEE YOUR IDOL IN A HUGE BUS GOING ALL AROUND THE STRIP OF LAS VEGAS WHERE THOUSANDS OF PEOPLE WALK THE STRIP AND SEE THE BUS!? It was a city bus. THE WORLDS BEST CITY BUS! I wish i could of ridden in it but i had no idea where it goes or stops. I really don’t care where the bus goes atleast i get to ride in it is what makes it all better. And then after a couple minutes stuck in traffic and i see the bus again but this time, ITS RIGHT NEXT TO ME.

I was like flipping out. This side of the bus is amazing. My mom was telling me, “Daniel, get that iPod inside the car. Anybody can pass by in his bike and steal that away from you.” Oh shut up mom this is LANA DEL REY’S BUS. HOW OFTEN DO YOU SEE THIS!? I NEED PICTURES. To all the haters who think she’s flopping take this!

After the madness we went to check in and walked to the strip and bought half a pound of m&m’s. They were totally worth it. M&m’s are like the best snack ever. This is like giraffe material. I can eat this and have a bad day and feel better. I love m&m’s. I also went to the Coca cola store in search of a cup since my other one broke. I also wanted to buy these pajamas cause i say Louis from one direction with the pj’s and thought they are so cool so i had to have them. But i decided not to. That’s his thing. Not mine. So i just bought a cup. And after that i went to the hotel room and stayed there all night. Too bad i’m not old enough to gamble.

On saturday i woke up with a huge hangover. I just wanted to die already…. Just kidding. I wish. All saturday i went to Circus circus and played at the arcade and went on the rides. 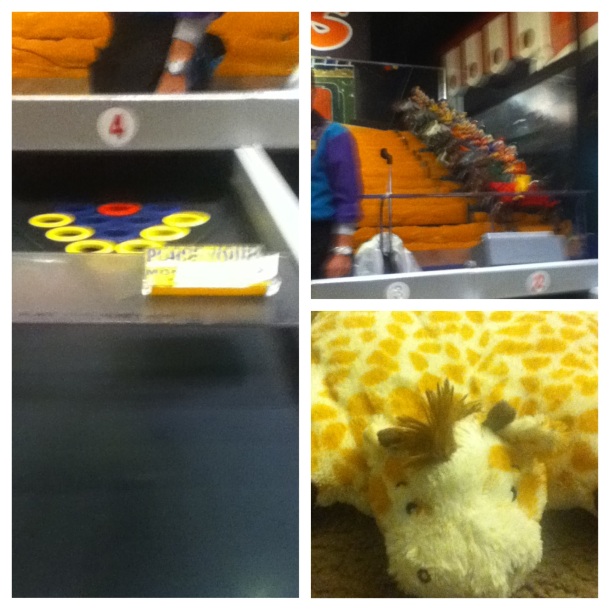 So i go to the arcade and my mom and sister are at the vending machines trying to get a doll and i see a giraffe pillow pet and the game. I HAD TO HAVE THE GIRAFFE PILLOW PET! IT’S MY MORAL OBLIGITY. The game seem so easy so why not play!? It was only $1 a play. It was so hard yet easy. I always got the yellow. And i always ended up getting 2nd or 3rd place. IT WAS SO NOT FAIR. After 5 games i still haven’t won. And then i see my step dad won and won the giraffe pillow pet with out asking and ran to him and took it away from him and kept it. He’s old he doesn’t need it! I’m old too but i’m a giraffe. He’s short. I was so happy i got the giraffe. AH! So happy i could die. I lie in bed every night and cuddle with it. Judge all you want guys. But i love this giraffe. It was love at first sight. After that we went to the rides at adventure dome and went home at night. Well to the room. Instead of saying room i would say home. So odd. It’s not my home its a fucking hotel room that probably has sperm all over it.

Sunday was my last full day at vegas so we decided to go more downtown Las Vegas AND VISIT THE FAMOUS PAWN STARS STORE THAT SHOWS ON THE HISTORY CHANNEL. 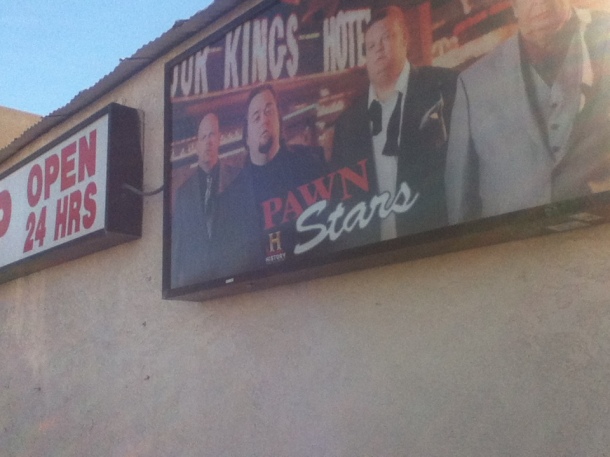 There was a long line to get in but the line went by fast. We were only waiting like 5 minutes to get in. The store is way smaller than shown on the television. One girl asked a worker behind the counter, “You guys should upgrade the store its so small.” And the guy just gives her a face and says yeah. He was like so mean. She’s not going to kill you dude. Calm down. I would expect a smile or something and say, “Yeah i know right.” Not just an yeah bitch. The ladies on the cashier were way nicer. They did have alot of antiques but alot of them were not for sale. The store was selling more merchandise than the jewelry and paintings they had. They had so much merchandise it was crazy. Like i don’t think alot of people here are a huge fan of the show. Most the merchandise got me thinking, who is this guy i never seen him in an episode. But that’s cause i hardly watch the show. Nobody from the cast on TV were there. Just the workers. Everything was so expensive tho. 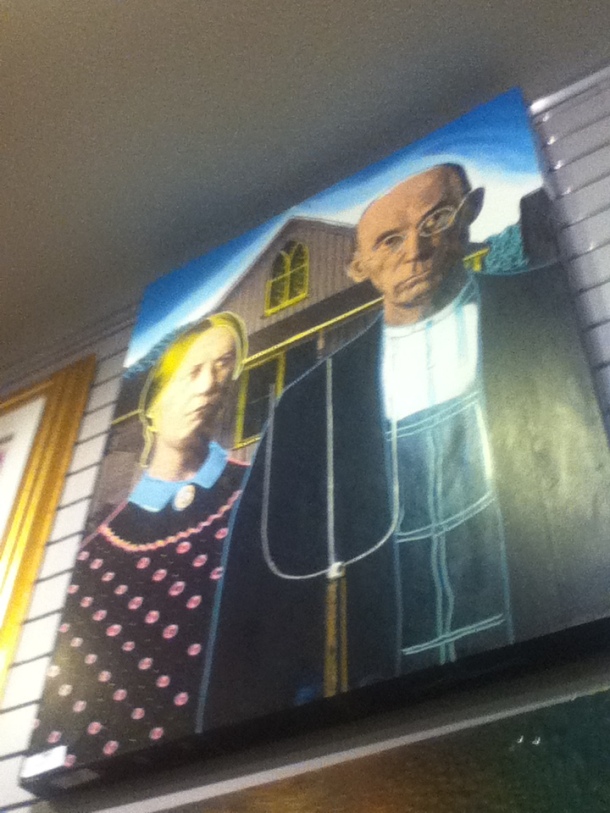 This painting was worth 8k dollars! And that wasn’t the original one. The picture looks so fake. It looks like the kind that could be sold at Ross for $20.

This one was worth 6k dollars! Like who the fuck would want this!? Who would want a funny picture of a zoomed one dollar bill with colors all over it that looks like what a little kid could of drawn with watercolors!? Maybe a rich toddler.

After the long walk back to the room i saw Lana Del Rey’s bus again. What a great way to end my last day at Las Vegas.

I also went to the zip line at old las vegas. I didn’t ride but my sister and my step dad did. I’m happily alive right now so no thanks.

As i was walking the strip the past 3 days i saw alot of teens with their friends. Alot of them that i made eye contact. They probably wish’d they had me with them. Giraffe’s are what get the party going! But there was one guy about my age, i think, who made eye contact and got to me. Like i felt something. Not love but desperate need for a friend on the trip. He looked so bored like he needed a friend to hang out with. I wouldn’t blame him. It’s Las Vegas!

Didn’t see no drunk people on the strip. It was daylight so there wasn’t much to expect.

There were alot of homeless too asking for money. One guy had a sign that said, Why lie i need a whore. That was a funny sign! My step dad looked at him with a, your so rediculous, face. And the homeless responded with a, eh its the truth, face. Haha! That made my night. Another one had the sign saying, why lie i need a beer which is typical. Another had a sign that said, too ugly for prostitution. He didn’t look so ugly. All he needed was a major haircut. Another poor guy had a sign that said, need money to get home to Boston. I felt so bad for him. He probably lost all of his money at the casinos. Nobody’s perfect. I wish i gave him money. If i were rich and had my own plane, i would take him with me to Boston. And maybe become my new best friend. I even imagined me being part of a foundation, giving him the money for the ticket. He had a sad, i just want to go home, face. His face will forever be imprinted into my brain. I just wish he goes home soon. It’s just crazy how i’m now very imapacted him. Like why now!? Why didn’t i stop and give him money!? Right cause i was being an idiot. I can only imagine missing his home and friends. If i were him i would cry on and on. Cause i would miss home. The city that inspires me to blog. Poor guy…

I also saw alot of impersanators on the strip too. Alot of them were Elvis and Sponge bob. One elvis was dark like Bruno mars. Another one was as fat as Honey boo boo’s mother. And another looked like a wanna be cool white guy. Like no thank you. The sponge bob’s looked so odd too. One was fadded. Another one was like huge and the outfit was made out of silk. Like put some effort on those costumes! One cool one was Johnny depp from the pirates of carribean and one from charlie and the chocolate factory. Now they did put some effort! They looked so real and cool too! I wish i took a picture with them but i was in a rush. I also saw hermit the frog with a sign, “I need money to get high. It’s not so easy being green.” And next to it were a group of homeless that looked like hippies. Now they do diserve the rediculous face.

This whole trip to Vegas was so fun. A trip i will never forget in so many ways. That was my 4th time visiting the drunk ass town. The only good thing is that i went to places i never been to. I still regret not going to the Cher Lloyd’s concert on Friday. So pissed. Whatever i’ll see her when she tours. THATS IF SHE RELEASES HER TOUR DATES.

Visit my other blog!

If you are reading this and like what you see, please visit my parent blog: ReadingLitty.com